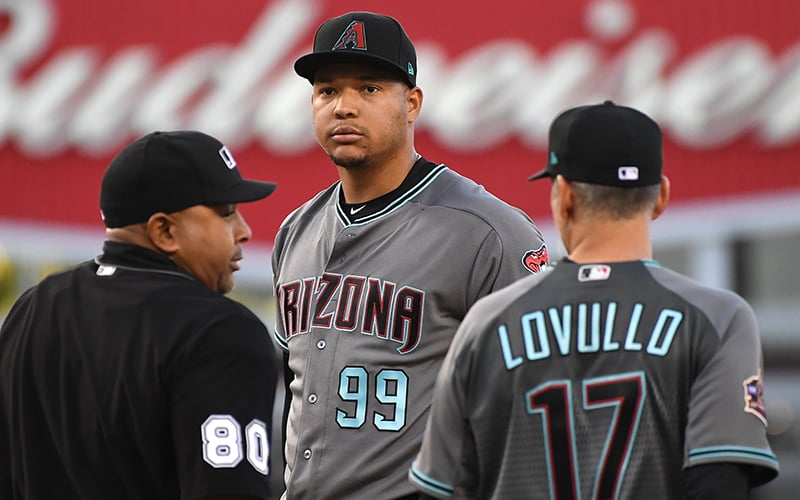 After pitcher Taijuan Walker left the Arizona Diamondbacks, he became the first known and active Major League Baseball player to create and sell a piece of digital art through a non-fungible token, otherwise known as an NFT. Walker now plays for the New York Mets. (Photo by Jayne Kamin-Oncea/Getty Images)

PHOENIX – Sports is a billion dollar industry, with revenue streams ranging from television rights to ticket sales. Add cryptocurrency and NFTs to the mix, and this latest gold rush has leagues, teams and players taking advantage of opportunities in an unlikely territory.

Former Arizona Diamondbacks pitcher Taijaun Walker, now with the New York Mets, was the first known and active Major League Baseball player to create and sell a piece of digital art through a non-fungible token, otherwise known as an NFT, the New York Times reported. The piece of art sold for 2.35 Ether, a form of cryptocurrency, or roughly $4,275. Proceeds from the auction benefited the team’s charity, the Amazin’ Mets Foundation.

What exactly is an NFT?

“(It is) a piece of digital asset, which can be video, file, photo, really anything that you like, to be managed by smart contracts,” said Dragan Boscovic, director of ASU’s Blockchain Research Lab.

Simply, think of it as something intangible – something you can’t hold in your hand – such as Walker’s digital art, or a unique video or Twitter CEO Jack Dorsey’s first tweet, which fetched a cool 1,630.58 Ether, the equivalent to about $2.9 million.

Boscovic added that with a smart contract “you can basically control certain properties of that digital asset.” If it’s a photo, for example, you can control who has access to it and how many copies of it can be made.

“An NFT has no value other than subjective value,” Boscovic said. “It is more like a piece of art; somebody who originated or created that NFT in the first place can command whatever price he or she likes.”

While Major League Baseball is putting some finishing touches on getting into the NFT game, here’s a player minting his own. This is the first NFT distributed by a big league player — and the proceeds will go to a very good cause. Bidding closes in less than 24 hours. https://t.co/u7JwcUDUbP

With the COVID-19 pandemic significantly limiting revenue opportunities, the timing for sports organizations and athletes to dive into the cryptocurrency and NFT world made sense.

Former University of Arizona tight end Rob Gronkowski, now with the Tampa Bay Buccaneers, took advantage of the craze early. He partnered with Medium Rare for an NFT card collection that sold out and brought in an estimated $1.8 million, Cointelegraph reported. The collection included five tokenized cards featuring in-game action shots of Gronkowski during championship-winning games.

Professional teams, too, are testing the waters.

The Golden State Warriors of the NBA announced they would be launching their own NFT collection. The collection ranges from commemorative digital rings to honor the organization’s six championships, digital ticket stubs from some of the franchise’s most iconic games and experiences such as signing a one-day contract with the franchise and meeting the team.

Proceeds will go to the Warriors Community Foundation, which aims to promote educational equity in the Bay Area.

Additionally, Sacramento Kings owner Vivek Ranadivé went on the Clubhouse app to announce his decision to let players and other members of the organization have their salaries paid in bitcoin if they wanted.

Brian McFall, a former minor league baseball player who is a financial planner and analysis manager at Taylor Morrison, urged caution since the value of a NFT can be as volatile as a stock.

“I think there’s so much money in the market from a financial standpoint, that I think team and sports institutions have to be weary,” McFall said.

Leagues have also found ways to use NFTs, through creating their own or partnering with companies.

The NBA, which collaborated with Dapper Labs, has found success with the creation of NBA Top Shot, a website that allows fans to buy, sell and trade officially licensed video highlights.

Since being established, NBA Top Shot has generated an estimated $500 million in revenue.

The cards range from the Common edition to Legendary, and some go beyond the Legendary status, being referred to as Legendary Limited-Edition 1-of-1 Platinum Anniversary cards.

McFall views the MLB’s agreement with The Topps Company Inc., as a move with the future of card collecting in mind.

“I think Topps understands that something like that could become obsolete,” McFall said.

Tying an NFT to a tangible item is also a direction the NFT craze is headed.

USC forward Evan Mobley, recently announced his decision to enter the NBA Draft and did so by creating a NFT to document the moment. His NFT was auctioned with an unknown reserve on OpenSea, an online marketplace for buying and selling NFTs.

LEAGUE BOUND! I’ve dreamed about turning pro since I was a kid. Come along for the journey: https://t.co/mIpfUaZRy0 #1of1 #NFT pic.twitter.com/nD1uTVkSkv

The rise in popularity of NFTs in sports has created a learning curve for everyone, including a local seasoned sports lawyer with a Juris Doctorate from Harvard.

“I have no familiarity with that issue,” said Dean Short, from the Gallagher and Kennedy law firm in an email response to an interview request.

He’s not alone. Terms including “blockchain” and “Ether” are still foreign to much of the public. That doesn’t mean it won’t take off.

What about the future of NFTs in sports?

With players, teams and leagues using NFTs, one concern that could be addressed is taking action in collective bargaining agreements to limit the usage of them and reduce any legal jeopardy.

The MLB’s current collective bargaining agreement ends on Dec. 1 and negotiations will follow that cover a range of issues.

McFall believes that leagues should act sooner rather than later to address NFTs.

“It’s always better to start regulating something and accepting that it’s gonna happen rather than fighting it,” McFall said.

Regulation could lead to concise ways that players and teams can navigate the NFT landscape.

“You’d rather get in front of it. (You) can control the narrative and control how you accept NFTs and how they’re gonna work for the league and teams,” McFall said. “ Rather than letting them run its course. That could be a bad situation if there’s no control around it.”

Since Arizona passed a bill to allow sports betting, the Phoenix Suns have reached an agreement with FanDuel to be the team’s official sportsbook and daily fantasy sports partner.

As NFTs and sports continue to intertwine, the future may hold both questions and answers, but until then, the rise and use of NFTs in sports is likely to continue as they become more mainstream.