Bitcoin’s mining difficulty, a measure of the network’s security and how hard it is to compete for block rewards, is poised to adjust to a new high.

The average bitcoin block production interval since the last adjustment on May 2 is around 8.25 minutes, which is more than 17% faster than the intended 10-minute-per-block interval.

Bitcoin’s mining difficulty is designed to adjust itself every 2,016 blocks based on the average block production intervals throughout the period, which typically lasts for 14 days.

Data sources from BTC.com and Poolin currently estimate that the upcoming difficulty epoch is about to jump by over 20%, which is due at block height 683,424, or around 10:00 UTC time on Thursday.

The last time a single bitcoin mining difficulty adjustment above 20% took place in October 2017. The expected largest difficulty jump in 42 months comes after a speedy recovery of the network’s hash rate from recent incidents in China’s Xinjiang province.

Security accidents at several coal mines in China’s northeastern region took place in mid-April, causing power plants in Xinjiang to shut down electricity supplies to data centers in the region. As a result, most of the bitcoin mining facilities in the area shut down for about a week before gradually returning to life on April 22. That was also a primary factor behind the bitcoin mining difficulty’s 12% decline posted on May 2.

Overall, the average bitcoin hash rate between May 2 and Thursday was around 178 exahashes per second (EH/s), which has increased by 6% in comparison to the previous average high of 168 EH/s recorded between April 2 and 16.

That means, on average, around 10 EH/s of computing power from newly delivered machines have been connected to the network over the past month. That amount of hashing power is equal to roughly 100,000 units of the newest generation of bitcoin mining hardware. 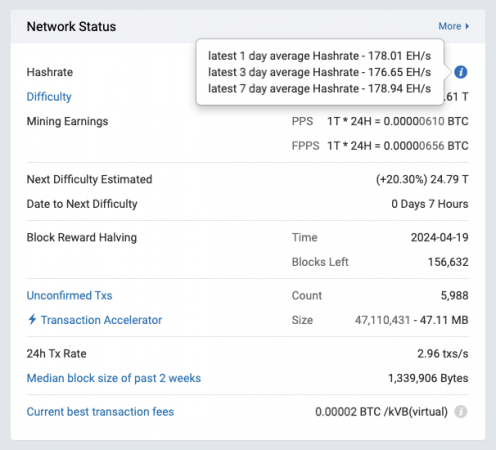 Ripple accidentally makes a good point in SEC defense: why isn’t ETH an unregistered security too?