The 18-minute film (which Yield Guild Games bankrolled and  Emfarsis Consulting created) is about a group of people in the Philippines. They were out of work in the pandemic and turned to playing a game, Sky Mavis’ Axie Infinity, that enables players to earn rewards as they play. Axie Infinity uses nonfungible tokens (NFTs) to uniquely identify digital items in its cartoon-style PC and mobile game. Players who play the game earn a virtual currency dubbed Smooth Love Potion. They can convert this into cryptocurrency and then convert it into real money.

The money has turned out to be life-saving income for people in the film. I call this the Leisure Economy, where one day we will all get paid to play games. And this film shows the idea isn’t a joke, though it is very much in its infancy. But it’s real enough. NFT sales topped $2 billion in the first quarter. According to blockchaingamer.biz, $452 million has been invested into NFT games in 2021, up from a total of $71 million in 2020.

Above: A scene from Play to Earn.

Residents interviewed in the film live in the rural province of Nueva Ecija, north of Manila, near Cabanatuan City.

The Philippines has 111 million people, and the pandemic and its resulting quarantine threw 7.3 million people out of work. The hardest hit were those were live day-to-day.

The filmmakers, such as Leah Callon-Butler and Nathan Smale, interviewed a 28-year-old fellow named Art Art, who discovered Axie Infinity when he was out of work because of the pandemic. Callon-Butler wrote a story for Coindesk, a cryptocurrency publication, about how the game made a big difference to people who were looking for jobs. 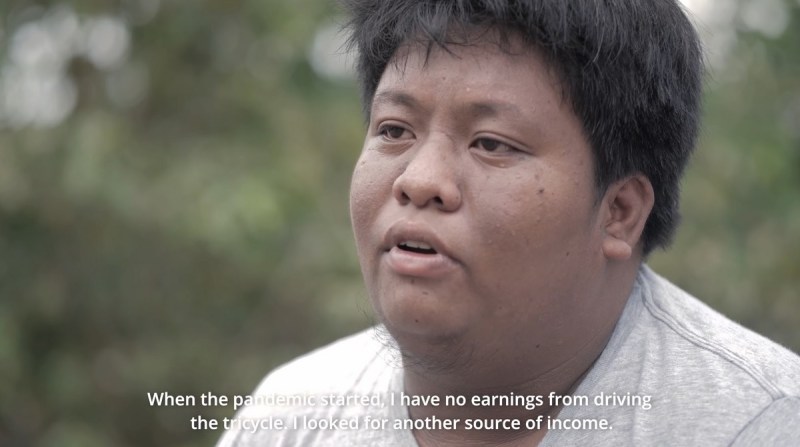 Above: Art Art made money from Axie Infinity while he couldn’t operate his business.

Players went to local internet cafes to play on PCs or they played on their phones. Art Art played the game, got his Smooth Love Potion, and converted the money. Over the first 15 days of the game, he made about $20. His success got around, and more than 100 people were playing Axie Infinity on his street alone. They could earn a few hundred dollars in a month, or multiple times the minimum wage in the Philippines.

Lola Vergie and Lolo Severio, two older residents, operated a store but used Axie Infinity to earn money while there wasn’t much business. They said they prayed Axie won’t go away, as they used the earnings to pay for medicine. The 75-year-old Severio plays up to 100 rounds of Axie Infinity every day, as he can’t go outside because of COVID-19. 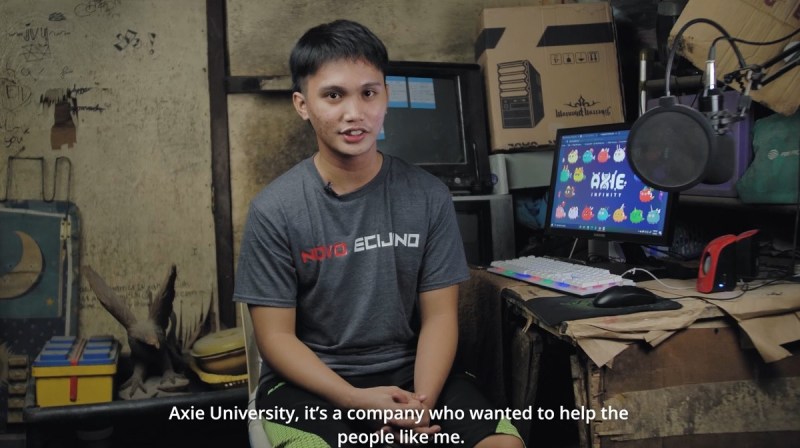 Above: An Axie player in the Philippines.

Jeffrey Zirlin, the head of growth at Vietnam-based Sky Mavis, said the Philippines became the No. 1 market for Axie Infinity, and he saw it as a fundamental change in the nature of work. One group formed Axie University to offer scholarships, or profit sharing, to get people into the game without having to spend anything at the outset.

Yield Guild Games, a startup player guild cofounded by Gabby Dizon, formed a player group that would share proceeds and let members earn more money. I wrote about Dizon’s company, and he spoke about NFTs at our GamesBeat Summit 2021 event. After our story ran, one observer accused Yield Guild Games of being a scam without adequate paperwork.

But Dizon showed me a white paper about the company’s plans, and it has since created a subDAO, or a decentralized autonomous organization that is required for the group ownership, for one of the related NFT games, League of Kingdoms.

Dizon said he plans to release the white paper soon and create the proper DAO paperwork for Yield Guild Games and then enable more people to “play to earn.” Yield Guild Games raised money for its work from Delphi Digital. Billionaire Shark Tank investor Mark Cuban appears in the film talking up the idea of “play-to-earn.”

Callon-Butler, screenwriter and narrator of the film, said the game itself won’t end poverty, but it is an example of how tech can be used by vulnerable people to improve their own lives.

GamesBeat’s creed when covering the game industry is “where passion meets business.” What does this mean? We want to tell you how the news matters to you — not just as a decision-maker at a game studio, but also as a fan of games. Whether you read our articles, listen to our podcasts, or watch our videos, GamesBeat will help you learn about the industry and enjoy engaging with it.

How will you do that? Membership includes access to:

Bitcoin plunges below $30,000, erasing all gains for the year so far