Nvidia (NASDAQ:NVDA) and NVDA stock have had a tumultuous eight months. This year alone, NVDA has gone on several runs, followed by steep drops. Shares have ranged in price, from a low of $462 in March to an all-time high close of over $645 in mid-April. Currently trading in the $560 range — off April’s mark by about 13% — and approaching a first-quarter earnings report that’s expected to be a blockbuster, is now really the time to pick up NVDA shares? 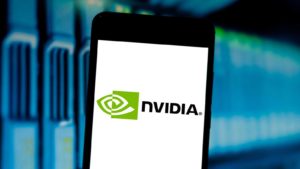 In short, yes. I think Nvidia is in a very good position right now. Plus, more importantly, the company has been looking to the future. Technology that is going to be at the forefront moving forward — like artificial intelligence (AI) and autonomous driving — is becoming increasingly powered by Nvidia chips.

NVDA stock has appreciated well over 1200% over the past five years. The company’s strategy and execution bodes well for the long-term growth prospects of the stock. That’s why Nvidia also features prominently on my recent list of seven great growth stocks.

Nvidia is expected to release its Q1 fiscal 2022 results on May 26. Previously, though, the company had already issued revenue guidance of $5.3 billion for the quarter, plus or minus 2%.

On Apr. 12, however, Nvidia announced that revenue for the quarter is tracking above those projections. In addition, the company noted that it has sufficient supply on hand to support sequential growth beyond Q1 — no small feat during a global chip shortage.

Crypto Is Once Again a Goldmine for Nvidia

Cryptocurrencies are hot once again, which means that demand for graphics processing units (GPUs) for crypto mining rigs is through the roof. Nvidia has been through this cycle before and learned a painful lesson. Crypto miners can be big business, but they compete against NVDA’s core customer base for graphics cards. That results in bad PR when stock runs out. Plus, the crypto market can dry up without warning. In 2018, this effect hammered NVDA stock when miners suddenly stopped buying.

This time, though, the company is doing things differently and managing the crypto market much more carefully. Acknowledging mining as an actual line of business, NVDA created a GPU specifically for that market. Additionally, it took measures to prevent miners from snapping up all its new consumer GPUs. New graphics cards will automatically throttle performance if used for crypto mining.

Nvidia’s new RTX 3000 series GPUs are still in short supply, but consumers aren’t competing against crypto miners to buy them now. Meanwhile, the new crypto cards are selling better than expected. In its Q1 earnings update, the company noted that it has already sold $150 million worth, compared to the projected $50 million.

The Arrival of Grace

This product is a custom designed, Arm-based processor aimed at data centers. NVDA says that its first data center CPU is optimized to deliver 10 times “the performance of today’s fastest servers on the most complex AI and high performance computing workloads.”

Of course, Nvidia has always been about GPUs, so its first data center CPU is a shot across the bow of PC processor leaders. If Grace lives up to claims, it has the potential to significantly grow Nvidia’s data-center market. Back in Q4, that market brought in $1.9 billion.

What About the Arm Deal?

All that said, though, maybe the biggest question surrounding Nvidia right now is its blockbuster $40 billion deal to acquire British chip designer Arm. That acquisition would open doors to a much wider range of tech markets, including mobile and smart homes. Nvidia would also gain steady licensing and royalty fees from the custom processors that Arm designs for a lengthy list of the world’s top tech companies.

However, that deal has been in trouble since it was announced last September. Specifically, it’s under scrutiny from the U.K. and the European Union. In February, the U.S. Federal Trade Commission (FTC) also opened a probe into the acquisition.

Howard Yu is a Management and Innovation professor at the International Institute for Management Development. In February, he wrote the following for The Conversation:

“In effect, the deal is pretty much dead before it starts. At the heart of this lies a row about technological sovereignty.”

So, there’s some skepticism as to whether this deal will succeed. If the acquisition were to go through, however, it would be a big win for the company. And if it fails? Nvidia and NVDA stock were doing pretty well without Arm in the first place.

Right now, NVDA stock earns a “B” rating in my Portfolio Grader. It has taken investors on an up-and-down ride for the past eight months. Factors like chip shortages and crypto volatility could also have an unpredictable impact on its revenue. However, despite rough patches, it has been on a relentless growth trajectory over the past five years.

Nvidia isn’t sitting still — it’s making big moves. And, even if they don’t all turn out well, the company is clearly not making the mistake of complacency. That’s a recipe for long-term success and growth for NVDA stock.

So, if you’ve been sitting on the fence about NVDA, the current pre-earnings dip might be the time to make a move.

On the date of publication, Louis Navellier had a long position in NVDA. Louis Navellier did not have (either directly or indirectly) any other positions in the securities mentioned in this article.

The InvestorPlace Research Staff member primarily responsible for this article did not hold (either directly or indirectly) any positions in the securities mentioned in this article.

Louis Navellier, who has been called “one of the most important money managers of our time,” has broken the silence in this shocking “tell all” video… exposing one of the most shocking events in our country’s history… and the one move every American needs to make today.

Monero Unmoved after Ex-Maintainer Fluffypony Is Extradited on Fraud Wrap